Nick Cannon has claimed his great-grandfather was a ‘Spanish rabbi’ and that he only learned about him after he was fired from ViacomCBS last month for making anti-Semitic remarks which, he now says, ‘hit home in a real way’ for his ‘Jewish’ family.

The comedian was fired last month over a podcast in which he said black people are true Hebrews and that Jews have usurped their identity. He also said black people couldn’t be ‘anti-Semitic’ because ‘we are the Semitic people’, and he referred to white people as ‘evil, rapists and savages’.

After being fired, Cannon lashed out at ViacomCBS, saying they were on the ‘wrong side of history’. He later apologized and is now trying to make up for the offense he caused.

On Monday, he appeared on the American Jewish Committee’s online program, AJC Advocacy Anywhere, where he apologized again and said he’d learned since making the comments that his family is Jewish.

‘My mother has been calling me every single day since this happened with so much family history. My great-grandfather was a Spanish rabbi. He’s a Sephardic Jewish man.

So, as much heat as I’ve been catching from the public and the outside, this hit home for my family in a real way because I come from a Black and Jewish family on my mother’s side,’ he said.

He went on to say he didn’t want to reveal the family history immediately because he did not want to look as though he was making an ‘excuse’.

Cannon also said that while he knew he’d hurt people with his comments and even with his apology, he demonstrated he was someone ‘of true character’ by saying sorry.

A lot of people may have been upset that I apologized, but I feel like that’s what someone of true character is actually supposed to do when they hurt someone,.

Now, let’s get through this process of truth and reconciliation,’ he said.

Cannon has spoken in the past about being raised predominantly by his paternal grandfather, James Cannon Sr, in San Diego.

He is close with his parents – Beth Gardner and James Cannon – but little is known publicly of Beth’s family history.

Cannon made the offending remarks on June 30 during an episode of his podcast, ‘Cannon’s Class’, where he was interviewing former Public Enemy member Richard ‘Professor Griff’ Griffin, who was kicked out of the rap group in 1989 for saying Jews were ‘wicked’.

The two discussed the controversial racial ideology of the Black Hebrew Israelites – claiming that ‘Semitic’ people had nothing to do with being white and that the term ‘anti-Semitic’ is only used to ‘divide’ people.

Cannon also delved deep into anti-Semitic tropes – ranting about history ‘going as deep as the Rothschilds, centralized banking, the 13 families, the bloodlines that control everything even outside of America.’

During the hour-plus podcast, Cannon then moved onto a wider discussion on race saying white people of the past were ‘savages’ and ‘barbaric’ because they lacked the ‘compassion’ that comes with melanin or skin pigmentation.

And I’m going to say this carefully…, he said before claiming that people who do not have melanin are a ‘little less’. 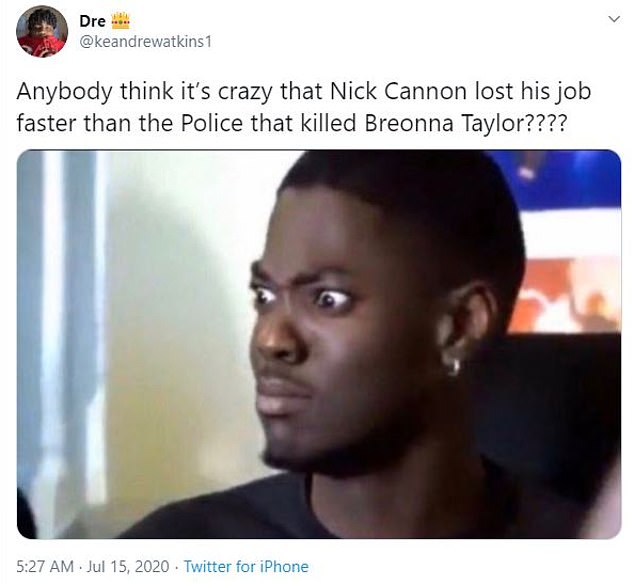 He was admonished for the remarks by some, but received support from others.

Diddy offered Cannon a spot at his Revolt TV network on Wednesday, inviting him to ‘come home’ to a ‘truly black-owned’ media company.

Dwyane Wade also tweeted his support for Cannon, but later took down the post after he was criticized for backing his controversial remarks.

We are with you, keep leading!’ he said in the now-deleted tweet.

THE ORIGINAL JEWS WERE BLACK