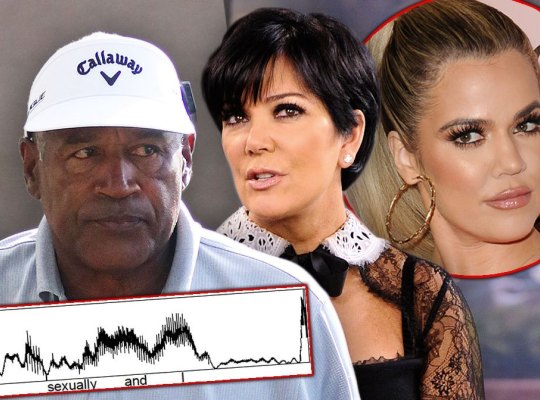 The latest information about OJ Simpson, and the fact that he may have been lying about Khloe and Kris oh yes…

Okay if you all have missed it. OJ Simpson had posted on his twitter awhile back. That he and Kris Jenner never had an affair and he wouldn’t do that to Robert Kardashian, whom he calls Bob. Take a look.

Now, that you all have seen that. You can now learn that someone had done a voice analysis and indicated that OJ Simpson was telling and I quote “bold-faced lies”.

So, with that in mind, just because he claimed that Robert was a great friend does not mean the relationship could not be fanned by the two of them getting together. He definitely had a romantic and sexual interests. He changed the volume of his voice at times to conceal the truth.

However, did you all noticed, how he spoke out about Norman Pardo, I mean he knew who said it. I mean, truth be told it could’ve been anyone. But he knew who’d started the rumor. When a person has something to hide and only a certain amount of people knows the truth. You automatically know who said it , because, why, a certain amount of people only knew the truth, not the lie but the truth. So, when he said his name, bells went off in my brain and that said that he’s hiding something. Because this Norman Pardoners also revealed in a documentary that Kris and OJ use to hooked up in a hot tub together, oh yes.

So, his ploy to shut down rumors didn’t work so well.

Because the voice analyzer also notice stress increase when he stated, “She’s not mine”. I mean, if he was certain there should have been very little stress. However, this was not the case, especially when he also said “not mine”.

So, you see OJ was lying and he and Kris are going to take this to their graves. That means, everything that Kris and OJ have said has been lie. Everything is lie! New Video Coming Soon!